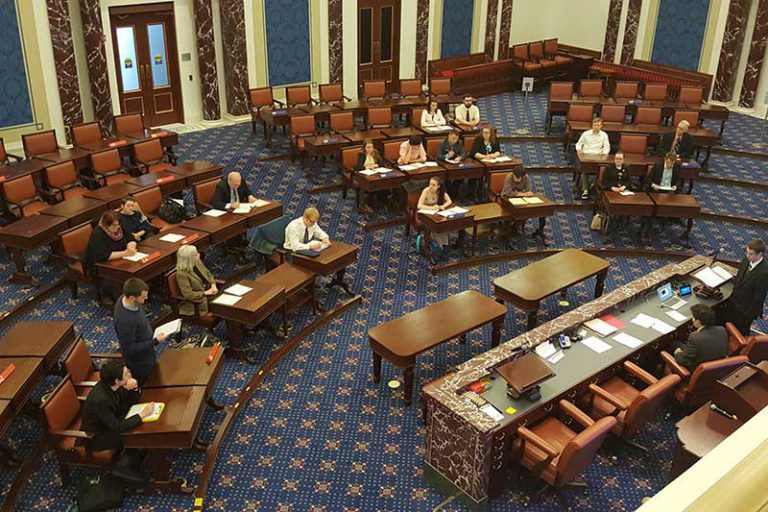 At Greenfield Community College, students learn by doing. GCC Political Science Professor Buz Eisenberg knows the best way to teach how a law is made is to have his American Politics follow the process Congress uses. This spring, students in Eisenberg’s two sections of that class considered whether marijuana should be removed from the federal Controlled Substances Act. They considered it exactly as Congress would, including a full-scale debate held in the replica of the U.S. Senate at the Edward M. Kennedy Institute for the U.S. Senate in Boston. While this was the fifth time Eisenberg has used a “Mock Congress” exercise with his students, it was the first time they have gone to the recently-opened Institute.

Eisenberg, explaining what his students did, said, “One student (Kyle Cote) acted as White House Counsel and drafted the bill, then submitted it to our mock Congress. POL 101A acted as the Senate Judiciary Committee, while 101B acted as the House Judiciary Committee. On April 26th and April 28th, the committees held public hearings, exactly as real legislative committees do. Students played the roles of committee chairs, members, aides, and witnesses.  People came to observe the hearings. They were videotaped, and you may view these hearings on GCC’s YouTube channel (https://www.youtube.com/watch?v=rHwsbEVn0JM and https://www.youtube.com/watch?v=wzvWKQihJZ0). On May 5th, thirty students went to the Edward M. Kennedy Institute for the U.S. Senate. After a tour of this amazing place, all of the students debated as U.S. Senators in the replica U.S. Senate, presided over by Senate Majority Leader Ben Olson. After a vigorous debate, the bill passed.”

Kathy Vranos, GCC’s Dean of Business, Information Technology, Professional Studies & Social Sciences, accompanied the students to the EMK Institute. She said, “I was privileged to witness these proceedings. I can tell you that the students were transformed by the experience and the environment. The debate was informed, articulate, passionate, civil, and procedurally on point for the setting. The students’ performance was stunning to all present. I suspect students will never forget this experience.”

Laura DiLuzio, 33, from Northfield, was one of those students. Her role was as the Secretary of Health and Human Services and she gave witness testimony during the hearing. She had always been interested in politics but before taking this class only had cursory knowledge about how laws are made.

Reflecting on the experience, DiLuzio said, “I learned that the way our political parties are aligned puts the American people at a disadvantage. The allegiance to one’s party, and voting along party lines, negates any need for either critical thinking or for our representatives to actually represent our interests. At first, we were all floundering, and unsure of what to do or how to proceed. I think that this is very true of our representatives as well. Their constituents have a problem and they need to figure out how to solve it for them without any direction. The great thing about doing this project for a class is that we all worked so hard to make this experience worthwhile. Because it was a college class and we were not actually members of the legislative branch, we did not have to deal with the pressure, lobbying, threats, and back room dealings that plague our Congress and Senate.”

DiLuzio came away from the experience with advice for other GCC students who are interested in American politics. She said, “Read, read, read! The importance of self-education cannot be understated. Reading books and articles that align with your point of view is great but to expand your knowledge and increase your awareness you need to read dissenting books and articles as well.”

DiLuzio will be graduating from GCC on June 4 with a Computer Information Systems- General Office Administration Certificate and will transfer this fall to Bay Path University to study toward a Bachelor’s in Business Administration. She was chosen as the Student Speaker for the 2016 GCC Commencement Ceremony. While at GCC, she served as Vice-President of Student Senate, President of Business Club, Orientation Leader, Reality Fair Volunteer, Phi Theta Kappa member, and student representative on the CAP Committee.

Commenting on the impact of the exercise, Eisenberg said, “Students were incredibly engaged in this process, and it was a joy to see them take ownership of the Congressional law-making function. Although the previous classes who engaged in this project were similarly remarkable, the ability to have the final debate take place in the replica U.S. Senate chamber at the EMK Institute added a poignancy to the experience that would be hard to otherwise achieve. There is always the question of whether, in a representative democracy, it is the job of an elected representative to follow her/his own moral rudder, or vote as constituents want. Whether it was by testifying as witnesses in the public hearings, or serving as legislators, students had to grapple with those tensions. It was a joy to see them confront, and handle, that difficult balance beautifully.”

Eisenberg also recognized the efforts of many people at GCC to make the project possible. He said, “This endeavor required a commitment on the part of GCC, and so many people. Mark Fletcher and the other maintainers who converted the Cohn Family Dining Commons into a Congressional hearing room; Ryan Aiken and Bjorn Silva who handled many of the logistics; Garry Longe and the folks at Educational Technology who amplified and videotaped all four proceedings; President Pura and Academic Chief Hruska who approved the travel; Dean Kathy Vranos who drove students to Boston and approved funding; Social Science Chair Brian Kapitulik and all of my colleagues in the department who approved spending a substantial amount of departmental funding to support the project. Teaching Political Science at GCC is a privilege, and our students benefited enormously by the institutional support.”