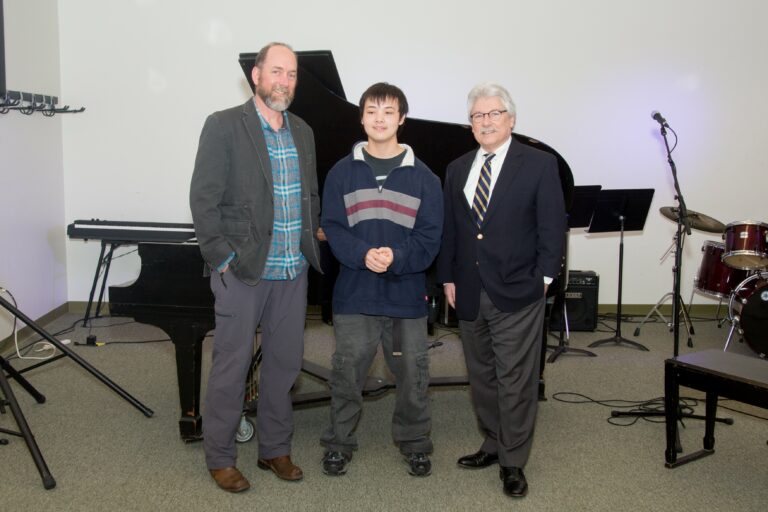 Simon Hwang-Carlos shines as a pianist who has excelled in his studies at Greenfield Community College. Today, Simon, 22, of Montague, will receive a 29 Who Shine Award from Governor Charlie Baker at a ceremony at the Massachusetts State House. GCC President Bob Pura nominated Simon for the Award which recognizes outstanding graduates from the Commonwealth’s public higher education system. Simon studied at GCC for three years, maintaining a 4.0 grade point average, and will graduate in June with an Associate’s degree in Music. He has been awarded a scholarship to study toward a Bachelor’s degree in piano performance at the University of Massachusetts Amherst. Each 29 Who Shine Awardee is asked to name a most influential campus mentor.  Simon’s mentor, GCC Music Department Chair Matthew Shippee also will be recognized at the Award ceremony.

Praising Simon, President Pura said, “Simon Hwang-Carlos has overcome many challenges turning what some identify as ‘disability’ into extraordinary abilities. He brings his passion for music and models excellence in learning to his community. As an accomplished pianist, he has successfully accompanied dozens of performances of jazz, classical, blues, and popular music at the college and in the community. At one level, he is the rock in the river strong enough to stand up to the challenges and the undercurrents that create barriers to education and success. At the same time, he is like the leaf that flows with the river at one with the sounds of our environment. Simon is an extraordinary blend of courage, intelligence, and heart. He represents the best of who we are at GCC.”

“Simon has made good on Massachusetts taxpayers’ investment in his education,” said Carlos E. Santiago, Commissioner of Higher Education. “Every year the 29 Who Shine remind us that our public college and university graduates represent the future of the Commonwealth. They are here to learn, here to stay, and it is incredibly inspiring to see how each honoree is contributing to our common good.”

Reflecting on his time at GCC, Simon said, “GCC is an incredible opportunity for all musicians. When I first came to GCC, I was very nervous. Yet, everyone here is very kind and at GCC I realized I really enjoy being a student. Professor Shippee creates a community in the Music Department. Because of his encouragement, I met many wonderful people and have realized how fun it is to play music with other people. It is mostly from Professor Shippee and his classes that I learned not only about music and how to be a musician but also how to be a person in the world.”

Commending Simon, Shippee said, “Simon is an outstanding student who succeeds in combining a genuine curiosity and open-mindedness for learning with a strong personal work ethic. Simon is highly regarded for his piano skills and has set the Music Department standard for dedication to developing his craft. Just as importantly, Simon is clearly respected and appreciated by his peers for the kind of person he is in all interactions.  Simon actively engaged in the whole person process of education and made the most of what was offered to him at GCC. His passion for music and learning is a model for all.”

“The 29 Who Shine honorees are exceptional student leaders who saw a way to improve something and acted on it, and for that we are grateful. They are a credit to the colleges and universities they attend. We are proud of their contributions to their communities and the Commonwealth,” Education Secretary James Peyser said.