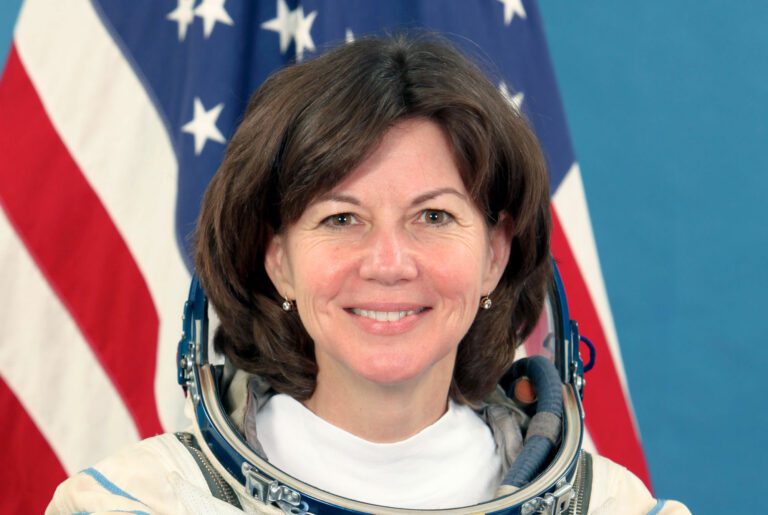 Astronaut Cady Coleman is all about using her fame and experience to help draw women and people of color into the sciences.

“People will listen to an astronaut,” said Coleman, a chemist whose storied career included two flights on the space shuttle Columbia for science-based missions in 1995 and 1999, and a six-month stint in 2010 and 2011 on the International Space Station.

Retired from the National Aeronautics and Space Administration (NASA), Coleman knows well that in the United States, only 24 percent of STEM jobs are held by women. So, she travels around the country, speaking about STEM, on a mission to inspire women and minorities into math- and science-based careers to enhance their ability to be problem-solvers in their own lives, in their communities, and in the world.

“You don’t have to take advanced astrophysics to be a useful problem-solver,” she said.

On October 22, Coleman will speak at Greenfield Community College from 3:30 to 5pm, kicking off the state-wide STEM Week and concurrent events on campus.

“We need to have everybody who can make a contribution as part of the team, and that really means women and minorities. My mission is to get everyone to the table,” Coleman said, noting that, in her talk, she will tell stories from space and offer lessons learned about team work.

Coleman’s talk comes on the first day of STEM Week at GCC, one facet of the state-wide STEM Week that was launched by Governor Charlie Baker and his administration. It will be held from Oct. 22-26 and will focus on STEM education across the commonwealth to boost student interest and raise awareness of STEM education.

Alysha Putnam, the STEM Special Programs Coordinator in the GCC Science Department, said she has planned a STEM-related talk to be offered each day of STEM Week at GCC. She also has mapped out STEM offerings for high school students in Franklin County and is involved in a panel presentation by and for educators and students at the four community colleges in Western Massachusetts.

“We want to show that STEM and liberal arts are actually partners and work together,” said Putnam. “We’re busting down the myths and boundaries that you can only be one or the other.”

“We have incredible STEM education and resources at GCC, and part of STEM week is to showcase and highlight what students have access to here and what kind of solid education we provide,” Putnam added.

A retired United States Air Force colonel, Coleman was in space as a NASA astronaut for 180 days. She entered NASA as a scientist and left as the chief of robotics, and while on the space station, she served as the lead robotics and lead science officer.

Coleman lives four miles from the GCC campus with her family. She was introduced to the college in the late 1980s and is now a trustee interested in getting area residents excited about education—STEM education in particular.

It makes Coleman proud that her bachelor’s in chemistry and her doctoral degree in polymer sciences both come from Massachusetts colleges—Massachusetts Institute of Technology and UMass, Amherst, respectively.

STEM and STEM Week at GCC

Putnam said GCC has nine degree options and four STEM-based certificate programs. It also offers a free STEM summer academy for eligible students, and S-STEM grants of up to $5,000 annually for STEM students with a GPA of 3.0 or higher who have a financial need.

After Coleman’s presentation on the first day of the week, the schedule is as follows: Oct. 23, from 12:30 to 1:30 p.m., “TED’s Talk: Science Reveals How We Got Here” by GCC faculty member Ted Johnson; Oct. 24, noon to 1 p.m. “Geoscience in Extreme Environments: Experiences from the Arctic, the Antarctic, and a NASA Space Pod,” by William Daniels, a post-doctoral researcher from UMass; and Oct. 25, 12:30 to 1:30 p.m., a GCC panel discussion, “Myth Busters and Boundary Breakers: STEM as Part of a Liberal Arts Education.”