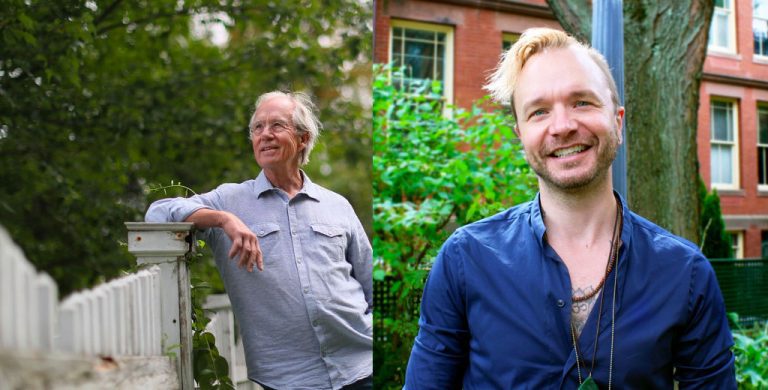 What do Hollywood and Franklin County have in common? More than rolling hills.

Both regions are home to a roster of outstanding artists. While the weather might differ, both regions enjoy a climate of blossoming creativity.

Harry, a motion picture editor and documentary film producer, is the Co-founder and Chair Emeritus of the Ashfield FilmFest, now in its 14th year of using film to promote community, cultural education and diversity. His resume is replete with well-known and less known projects. His career started at UCLA in Ethnographic Filmmaking editing “The Farmersville Project” for the Canadian Film Board, followed by work in the educational field for Encyclopedia Britannica Films and other documentary projects. He then transitioned to mainstream Hollywood, editing Steven King’s “Children Of The Corn,” HBO’s Tales from the Crypt, and the smash hit trilogy “Back To The Future,” to name a few. He is also a voting member of the Academy of Motion Picture Arts and Sciences  and has been involved in the Academy Awards each year since 1985. Though new to the college, Harry is a well-established influencer and mentor in the town of Ashfield. Through the FilmFest he and his colleagues have helped launch at least six young people — all local— to go on to full time work in the video and television industry.

“Many people have mentored me throughout the years and I now try to give back as much as I can with young people,” he shares.

A make-up artist, fine artist, performing artist and drag queen, Joe Dulude II has had a similar trajectory. Best known for his makeup designs for the Tony Award-winning hit musical Wicked, this Emmy-nominated artist has worked on productions on Broadway, Off-Broadway, in the West End in London and across television and film, enhancing the faces of many well-known actors and performers. Joe came to Western Massachusetts in 2014 and soon teamed up with Eggtooth Productions. Taking on the character of Mr. Drag, Joe regularly performs alongside his friend Karl — played by his creative co-conspirator Katherine Adler — in what has been described as an all-ages appropriate drag show, with a few jokes inserted just for adults. Drawing on his love of makeup, song, music and dance, Joe created the show with two aims: make the audience smile AND leave them with something to think about.

This combination of unabashed fun and change-provoking dialogue is what makes Joe’s work unique. Similar to Harry, whose efforts now focus almost entirely on this area, Joe has been pulling back from some of his responsibilities afar in order to make more time and space to engage with local projects.

“I want to be more part of the community,” he begins, sharing a list of ideas he has going, including immersive performances, cross-community dialogues, and the creation of a safe multi-purpose space for the LGBTQ+ community to create, learn, and socialize.

Before pulling back from the last of his teaching commitments in higher-ed, Joe was offering courses on make-up that had as much to do with technique as they did with identity. At the same time his students were learning about production and design, they were using writing, music and photography to ask deeper questions about personhood and what it means to construct — and deconstruct — a character or an image of themselves or someone else.

“What I find” says Joe, “is that a lot of teachers are too afraid to approach these subjects with students because they don’t know how to handle it themselves.” Because he welcomed dialogue around identity, Joe’s classes became a place for students to talk about joy, fear, and the cultivation of resilience.

This work directly informs what Joe and Harry have planned for this year’s Presidential Fellowship. Before Covid-19, they had already engaged a small group of students in the first part of an interdisciplinary workshop — using art, writing, meditation and other creative practices to help participants discover, dissect, and integrate their various identities. This process — described as inspiring, freeing, and deeply therapeutic — was filmed by Harry. The community can expect this type of workshop to continue once it’s safe to come back together.

“This project will include people of all manner and stripe inside and outside the GCC community,” says Harry. “We are hoping that we will get an entire rainbow of folk talking about their personalities, how they develop their personalities, and how they feel about themselves.” Eventually, Joe and Harry will explore ways to bring this project beyond GCC and engage an even larger community.

Meanwhile, as long as social distancing continues, the two fellows, along with the entire art department at GCC, are coming up with new ways to engage the community in remote activities. The college, who has already begun collecting student’s creative responses to the global pandemic on a new dedicated webpage, will be working with Joe to host a Facebook Live event on Wednesday, April 15th at 7pm.  In this event Joe will share his MascFem paintings, talk about his inspiration for the series, and share about his creative process. This event will conclude with a virtual Q&A — an opportunity for students and community members to ask questions and discuss ways to get involved with future work.

“We are delighted to work with these two incredible artists to create not only art, but also to facilitate courageous conversations between our students and within our communities,” comments GCC’s president, Dr. Yves Salomon-Fernández. Responsible for their selection, Yves saw something far greater than the accolades and resumes these two Fellows come with. “Beyond their Hollywood and Broadway credentials, Harry and Joe are two people who are deeply engaged in our community and who are committed to GCC’s mission. Their lived experiences are influencing our pedagogy in such unique ways and I’m so grateful to have them as the inaugural Presidential Fellows.”

The community will want to keep an eye on these two Presidential Fellows, whose work is sure to ignite new knowledge, critical thinking, and creativity at GCC and beyond. When asked what kind of legacy they want to leave, both Fellows replied pretty much the same.

Said Joe, “I want to know I did good in this world and that I helped change people’s lives for the better.”

In Harry’s words, “I want to have affected people’s lives in a real positive way.”