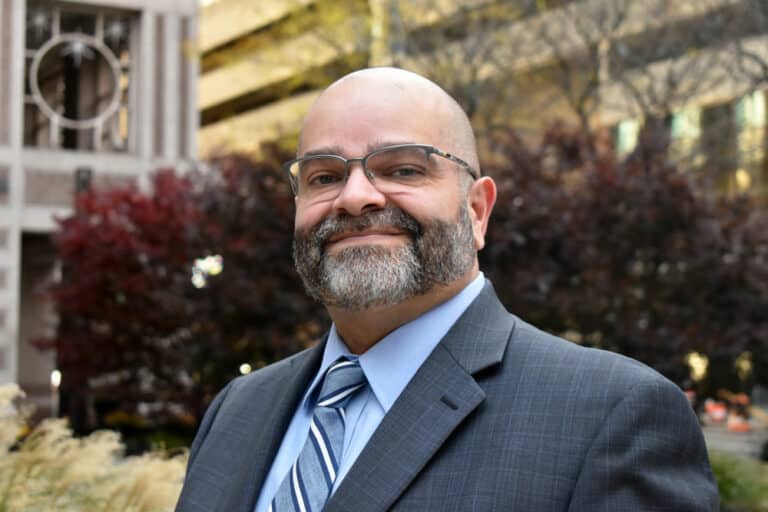 Greenfield Community College Board of Trustees member Hector Toledo has been appointed chairperson of the College’s Board of Trustees, replacing long-time chair Robert “Robbie” Cohn. Toledo was officially appointed to the role by Gov. Charles Baker on Nov. 2.

Toledo steps into the role after serving on the GCC Board of Trustees since October 2019. Toledo brings over 30 years of financial and banking leadership experience to the role, as well as over 25 years of volunteer experience. Toledo’s philanthropic experience includes serving on the board for the Food Bank of Western Massachusetts, YMCA of Greater Springfield and the United Way of Pioneer Valley, and as the former chairperson for the Board of Springfield Technical Community College.

Cohn, who stepped down from his role as chair that he’s held since 2012, will remain on the board.

In addition to Toledo’s time on the GCC Board of Trustees, he has worked at Greenfield Savings Bank as Vice President and Branch Distribution Network Officer and also served on boards with longtime former GCC President Robert Pura. Currently, Toledo is Vice President and Commercial Lender for New Valley Bank, lives in Springfield with his wife Danielle, and has two adult children.

Toledo is also a proud alumnus of Springfield Technical Community College and was a first-generation student.

“I truly believe that community colleges are the key to local growth. They provide graduates that are the most likely to stay in the area and produce the jobs that the market needs, and we do it for a fraction of the cost of four-year colleges,” Toledo said. “We are taxpayers, consumers of local goods and services, and the engine behind the growth, and at times survival, of the communities we live in.”

Toledo assumes his role at a pivotal time for GCC. The College is starting a nationwide search for its next president and is also taking on initiatives to address diversity, equity and inclusion, including hiring its first ever Director of Diversity, Equity, and Inclusion.

“We’re immensely thrilled about the appointment of Mr. Hector Toledo as chairperson for the Greenfield Community College Board of Trustees. Hector’s decades of experience in the financial and nonprofit worlds will benefit the college and, most importantly, our students greatly,” interim GCC President Richard Hopper said.
“Hector has a wealth of experience in finance and management and he’s just the perfect person to take the reins,” former chair Cohn said. “I’m thrilled with this outcome and I couldn’t be happier for the Board of Trustees or the College.”

Toledo’s predecessor, Cohn, leaves an impressive legacy for Toledo to follow. Cohn’s tenure with the GCC Board of Trustees began in 2009, and he served as chair starting in November 2012. Before his time on the board, Cohn started GCC’s annual golf tournament in 1994, leading to over two decades of contributions to the College. He was also the owner of Greenfield real estate firm Cohn and Company for nearly 40 years.

“We are incredibly grateful for the contributions Robbie has made not only to Greenfield Community College, but to the community as a whole. He stands as the exemplar of philanthropy and commitment to higher education,” Hopper said.