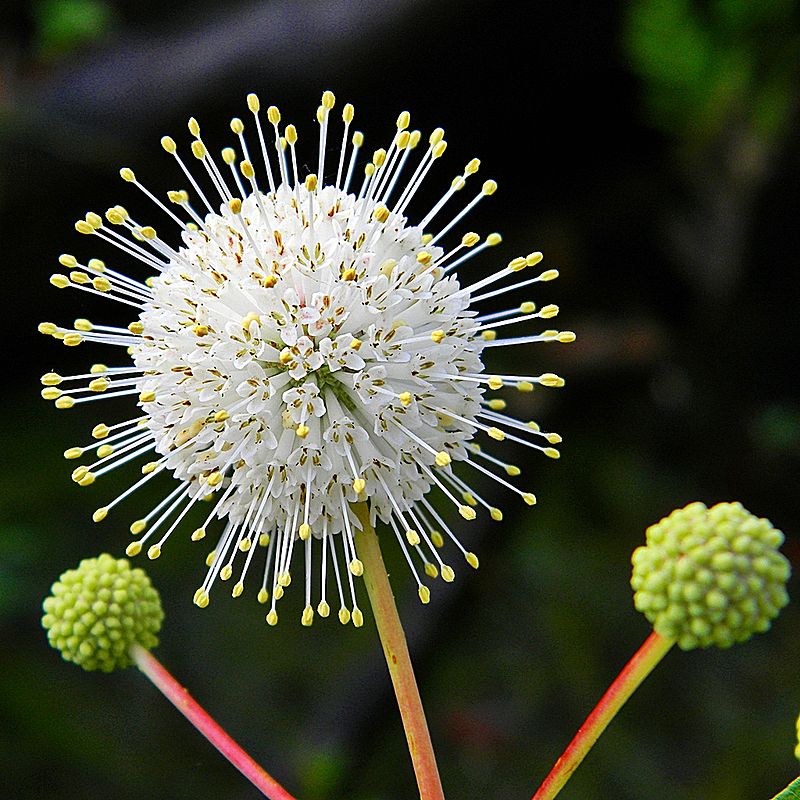 Where in the OLL?

Common buttonbush is found in the middle of the easternmost-facing row of the botanical garden. It is used for native habitat, erosion control and ornamental properties. It forms a dense stand and its swollen plant base stabilizes the plant, which helps with erosion control. Buttonbush has showy flowers and fruits. The persistent fruits provide winter interest. It can provide food for pollinators, birds, and habitat for some waterfowl.

Common buttonbush is a multi-stemmed deciduous shrub or tree that can grow between 5 to 12 feet (rarely to 20 feet). Its spread is between 4 to 8 feet. It has a woody above-ground trunk that grows into a more tender herbaceous plant above. It is best for its showy flowers.

In summer, it has long, shiny, elliptical green leaves with prominent veins. Leaves attach to a central peduncle (stem) oppositely in pairs or whorls of threes. It has red petioles. (In the the botanical garden at GCC, it leaves in whorls of three, and sometimes has leafier whorls, near the flower/fruit.) In fall, leaves begin to turn dull green and become yellowish. In winter, leaves fall off or remain withered. There is a terminal flower bud at the end of each stalk.

During summer, common buttonbush has uncommonly beautiful flowers that attract a variety of pollinators. When pollinated, the flowers become a persistent fruiting head.

In winter, migrating birds, wood ducks and shorebirds will eat these seeds of the persisting brown-to-black seeds.

The beautiful buttonbush flowers are the most interesting feature of the plant. They grow in white, fragrant, round flowers that are 1 to 1.5 inches in diameter. They are actually inflorescences of dozens of tiny white four-lobed flowers that are fused together in a horn shape. They grow in a dense, spherical cluster. It has a perfect floral arrangement. Each tiny flower grows one pistil well above the ball-shaped flower head, giving it a unique “starburst” appearance that has been likened to a “pincushion.” There are four stamens attached to each petal lobe. The filament is extremely short. The flower heads are attractive to bees and butterflies, and some hummingbirds. It typically blooms in midsummer, depending on conditions. The bloom range is from June through August in the Northeast.

Its flower has given rise to other common names for the plant, such as honey-bells and button ball.

Common buttonbush grows in USDA hardiness zones 5 through 9. It is a pioneer species in flooded areas. It prefers medium to wet moisture levels. It is intolerant of dry soils. It grows well in sandy, loamy or alluvial soils with sand or silt surfaces. It prefers acidic to neutral soils. It is intolerant of alkalinity. It grows more abundantly with increased water and light levels. Buttonbush needs full sun to part-shade. However, flowering is poor in shade or in dry soils.

Common buttonbush may be assisted with a slow-release fertilizer to enhance flowering and seed production.

Pruning is unnecessary, except for shaping. Dense shrubs can be cut back in the fall when water levels are low.

Plants in areas with fluctuating water levels may need debris cleared out of the canopy.

The biggest challenge to establishment of a new buttonbush plant is to control competition during the first growing season.

Seeds can be collected in the fall when they have turned reddish-brown. No pretreatment to break dormancy is necessary. Sow seeds direct into moist humus soil in full sun or part shade.

There are no known pests for common buttonbush in this area, although there are species of insect that eat the leaves.

Buttonbush provides beautiful flowers and food and habitat for native animals. It also provides some winter interest due to persistent flower head structure, even after seeds are eaten or fall off. The nuts and leaves can continue to provide food for waterfowl and shorebirds will consume the seeds. White-tailed deer browse foliage.

Butterflies, bees and hummingbirds are attracted to its nectar. Bees use it to produce honey.

WARNING:  Common buttonbush contains CEPHALATHIN, a poison that can induce convulsions, vomiting and paralysis if ingested.

Native Americans are reported to have used common buttonbush medicinally. Roots were used for blood medicines and muscle inflammation. Decoctions were made of bark for use as anti-inflammatory medicine for rheumatism and muscle inflammation, as a wash for irritated eyes, an anti-diarrheal agent, a skin astringent, and for headache and fever relief. The bark was chewed to alleviate toothaches.