Greenfield Community College is pleased to announce that Anthony “Tony” Worden has been appointed to the esteemed GCC Board of Trustees.

Worden was appointed to the Board of Trustees on June 17 by Gov. Charlie Baker. One of 11 trustees, Worden will replace former trustee Joanne Marqusee. 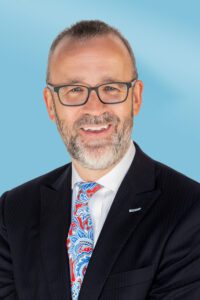 “As a graduate of GCC, I understand the important role the institution plays in providing access to higher education to those who might not otherwise be able to attain it. And as a long-standing member of the local business community, I see the impact GCC makes on the economic and social health of the community. By taking on this role I’m hoping to give back while at the same time doing my part to ensure that GCC continues to thrive,” Worden said.

Worden, a Greenfield resident, comes to the GCC Board of Trustees with nearly 25 years of banking and leadership experience. He currently serves as President and Chief Executive Officer for Greenfield Cooperative Bank, an institution he’s been with since 2009. He also serves as director of the United Way of Franklin and Hampshire Region based in Greenfield.

Worden’s ties to GCC go beyond his own education, though. Worden first met his wife, Jennifer, while they were both students at GCC, and their two children, Henry and Amelia, are both graduates of the institution, as well.

“Tony Worden is a fixture in the Greenfield community and will be a wonderful addition to our Board of Trustees. With a combination of personal ties to the institution and professional ties to the region, he’ll bring a unique perspective that will serve us well,” Dr. Michelle Schutt, President of GCC, said.

“Tony’s a perfect fit for the Board of Trustees,” GCC Board of Trustees Chair Hector Toledo said. “His personal connection to the institution and deep roots in the community show how deeply he cares about the success of GCC and its students.”

Greenfield Community College President Michelle Schutt said, “It is wonderful to have a member of the GCC alumni choosing to give back to the college by serving on the board. We are grateful to have Tony and his financial acumen joining the Board of Trustees.”