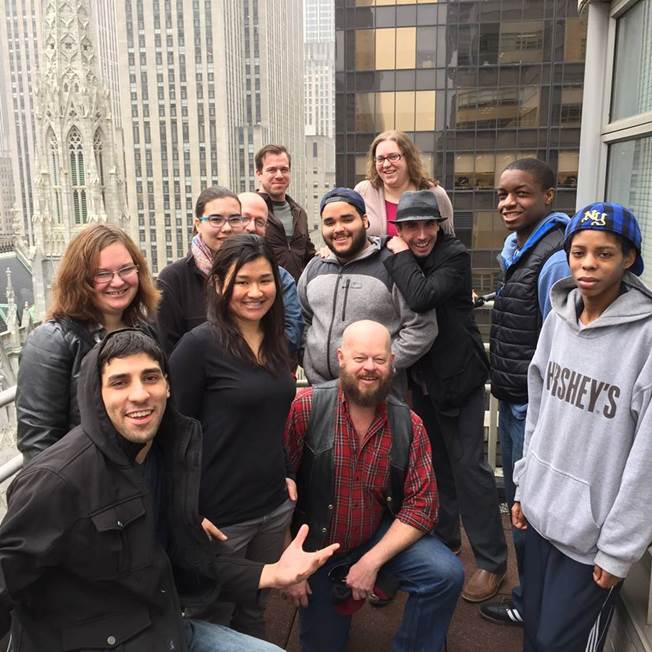 Ask most people what they imagine when they hear “Business Club trip,” and they probably don’t say meeting an attorney whose entertainment law firm represents Lady Gaga and Britney Spears, learning a song and dance choreography from a cast member of the Broadway show “Chicago” and then attending the show, watching the longest baseball game in the history of new Yankees Stadium, and checking out next year’s cars at an international auto show. Ask the ten GCC Business Club members who visited New York City earlier this month on the Business Club’s 13th annual trip to New York, and you’ll hear that and more. The trip was organized by the Club and Thom Simmons, Co-Chair of GCC’s Business and Information Technology Department.

For those students, “Business Club trip” will remind them of sitting at a Manhattan conference table with Simmons’ childhood friend, attorney Steven Beer, who specializes in the use of crowdfunding. Beer, a Partner at the Law Offices of Franklin, Weinrib, Rudell & Vassallo P.C., and the students discussed just-released laws regulating crowdfunding and how the students might use crowdfunding for their own businesses.

They’ll also remember meeting with Beatrix Perez, Business Manager of Nanette Lepore Fashion Designers, and talking about supply lines for clothing manufacturers and efforts to keep more of those manufacturers in the United States. Nanette Lepore is in the forefront of the movement to strengthen the U.S. textile industry and is an underwriter of the hit TV show “Project Runway.” The students first learned about Nanette Lepore through a case study in GCC’s Introduction to Business Class and got to see the business in action while touring the cutting, sewing, and bundling operations.

Why learn about fashion design, Broadway shows, baseball, cars, and business law? Simmons and the Club, who started planning the trip last September, wanted to appeal to the wide range of interests of GCC Business students. Steven Beer and Nanette Lepore do not normally offer student tours. The students were able to meet with Beer and Perez because of Simmons’s personal connections and because GCC has established a reputation in New York City through past Business Club trips.

Simmons said, “What struck me is the incredible richness of the conversations the students had with people who are at the top of their field. Steven and Beatrix looked forward to talking with the students and took time out of their work to meet them. Clearly, GCC has a reputation for good business students and these business professionals are impressed with GCC students.”

Business Club President, Laura DiLuzio, 32 of Northfield, learned from both planned and unplanned experiences on the trip. She said, “It was powerful to meet with Steven Beer and hear about his extensive experience with crowdfunding. It helped me see possibilities for funding my business. I also learned a lot from and about my peers, as we planned the trip in GCC’s Hammond Business Studio, and then as we navigated unfamiliar situations along the way. It was a good bonding and networking experience and we each were able to teach each other.”

Business Club Treasurer Jamie Cocco, 30 of Wendell, is in his first semester at GCC, studying toward a Business Administration Transfer degree. He said, “There was so much of value in each part of the trip. I learned about stage presence from the Broadway workshop and about how crowdfunding might be useful for businesses I create.”

Dahuris Fernandez, 20 of Amherst, performs as OHH-D, part of the rap music group The eGOmaniAKs. He said, “Meeting Steven Beer changed my perspective. He works with musicians who are idolized by millions, is passionate about his work, and has been tremendously successful, yet was humble and very approachable. Since talking with him, I feel more driven and motivated to succeed.”

To learn more about GCC’s Business courses, contact Thom Simmons at simmonst@gcc.mass.edu or 413-775-1482.