The Nelson Mandela Book Award was created in the spring of 2014 as a way to honor the life and work of Nelson Mandela after his death on December 5, 2013. The GCC Diversity Standing Committee assumed the role of overseeing and awarding the scholarship in 2015. 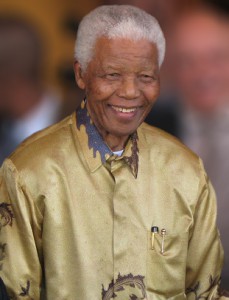 Mandela was born in segregated South Africa in 1918 and spent his life working to end apartheid and create legal and social equality between black and white South Africans. Jailed as a political prisoner for 27 years, he was elected as president in the first democratic election for the country shortly after his release from prison in 1990. He led the country through major changes, ending government-mandated racial segregation while maintaining peace. He stepped down from the presidency in 1999 in order to help other countries navigate their conflicts while remaining the unofficial cultural leader of South Africa.

This award is given annually at the GCC Foundation Scholarship Awards Ceremony to a GCC student who meets the criteria below. The award consists of a small cash prize and a book chosen by the scholarship committee. The book may be related to the life and work of Nelson Mandela or related to the work of the award winner.

The Nelson Mandela Book Award is made to those who demonstrate commitment to, and action toward, diversity, equity, inclusion, and/or social justice. An awardee’s efforts are consistent with the DEI and Community elements of the GCC Principles of Education, which are noted below and available on the GCC website (https://www.gcc.mass.edu/about/principles-of-education/):

■ Recognize how the foundation of one’s ideals and values emanate from one’s particular background and experience
■ Participate in communities as both teacher and learner, connecting with others, sharing thoughts, and creating knowledge while taking advantage of an open environment that values critical thinking and civil discourse
■ Enhance one’s understanding of various forms of discrimination and oppression while embracing the principles of access to promote equitable opportunity for all in the teaching and learning experience
■ Explore, understand, and respect the tenacity and validity of diverse values and heritage

We're sorry but this year's application is no longer available.

Embracing your identity and the identities of others

To contact a member of the Diversity Standing Committee, email us at div_standing_comm@gcc.mass.edu