Dr. Martin Luther King, Jr. (January 15, 1929-April 4, 1968) worked against the triple evils of poverty, racism, and militarism by utilizing the six principles of nonviolence, and the six steps of nonviolent social change. (1) 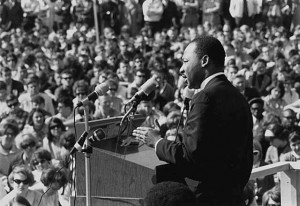 In December 1955, he led the first great African-American nonviolent demonstration in the contemporary United States, the bus boycott. On December 21, 1956, after 382 days, the Supreme Court of the United States declared the laws requiring segregation on buses unconstitutional. In 1957, he was elected president of the Southern Christian Leadership Conference. He took ideals from Christianity,  operational techniques from Gandhi, and integrated them into the organization. In the eleven-year period between 1957 and 1968, King traveled over six million miles and spoke over twenty-five hundred times, wrote five books and numerous articles. In those years, he led a massive protest in Birmingham, Alabama, that caught the attention of the entire world, providing what he called a coalition of conscience, and inspiring his “Letter from a Birmingham Jail,” a manifesto of the African-American revolution; he planned the drives in Alabama for the registration of African-Americans voters; he directed the peaceful march on Washington, D.C., of 250,000 people to whom he delivered his address, “I Have a Dream.” He became not only the symbolic leader of American black people but also a world figure. At the age of thirty-five, Dr. Martin Luther King, Jr. was the youngest man to be awarded the Nobel Peace Prize. On the evening of April 4, 1968, while standing on the balcony of his motel room in Memphis, Tennessee, where he was to lead a protest march in sympathy with striking garbage workers of that city, he was assassinated. (2)

The Diversity Standing Committee at Greenfield Community College invites nominations for two annual awards honoring the life of Dr. Martin Luther King, Jr. The Living the Dream and Bright Lights awards will go to individuals or organizations that have carried on the ideals of MLK in their school or community.

Former Greenfield Community College President Robert Pura said in 2003 about the creation of these awards: “Dr. King once advised a graduating class to ‘Make a career of humanity and commit yourself to the noble struggle for human rights.’ We have many such people in our communities who stand up for social justice and the values and ideas that Dr. King taught. Those are the kind of people we hope to learn about through your nominations.”

Former Director of Diversity Herb Hentz said, “My favorite words of Martin Luther King are ‘I have a dream.’ Of course we all continue to work towards fulfilling that dream of a day when people come together without looking at one another on the basis of race, religion, gender, etc., but as human beings.”

The DSC will consider the following qualifications.

(1) For more on the King philosophy, visit https://thekingcenter.org/king-philosophy.

The 2023 deadline for nominations is Tuesday, February 28. The awards will be presented at GCC’s March All College Meeting. (Note: after you select an award option, more prompts will appear.)

Embracing your identity and the identities of others

To contact a member of the Diversity Standing Committee, email us at div_standing_comm@gcc.mass.edu